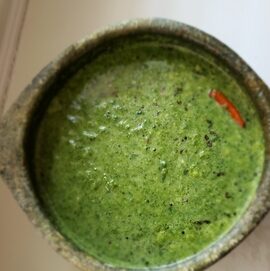 Keerai Molagootal is a classic Palakkad Iyer dish that is delicious, honest, and wholesome. It is an amalgam of coarsely pureed greens, toor dal (Tuvaram Paruppu), and coconut.

The great thing about Molagootal is that you can alter the ratio of the above three ingredients to suit your palette and the ingredients available. I’ve seen Keerai Molagootal that’s brown in color with just specks of green where coconut and dal play a predominant role. But I personally like a bright green-hued one, where the green leaves are the hero, followed by the Paruppu (lentils) for body and finally just enough coconut for binding the ingredients together.

This dish is traditionally made with hard leafy vegetables like Mulai Keerai (Amaranth leaves) or Arai Keerai, but it could very well be made with any kind of green leaves, such as Spinach or even Kale. The stems of Arai keerai and Mulai Keerai tend to be tough and so if you’re using these varieties of leaves, pick the leaves and keep the tender stems only. Roughly chop the leaves and proceed as per the recipe below. I’ve used Spinach here.

A typical meal combination with Keera Molagootal would include, a puli pachadi or a puliyakutti uperi, Vendakkai/Mathan Aana Pachadi, sometimes thayir pachadi is served as an accompaniment,vepilai katti (balls made out of citron leaves), Vadu manga or salad. Rasam and thayir (yoghurt) act as second and third courses in most of the Palakkad Iyer Meal combo.