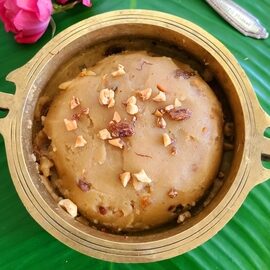 A luscious and soul-satisfying South-Indian dessert made up of yellow moong dal/lentils, sugar and ghee and finished off with a garnish of toasted cashews and raisins

Halwa: A common moniker for a sweet-dish made by stewing pulses, nuts, vegetables or a combination thereof in sugar, ghee and/or milk.

What a princely name for a sweet-dish made from such humble ingredients (Moong Dal, Sugar and Ghee), I remember thinking, when I first got to the bottom of this dish (quite literally, haha!). However, that thought vanished as soon as I took a bite and was assaulted by it’s nutty flavor and luscious texture, all punctuated by the crunchy and meaty textures of the ghee-roasted cashew-raisin garnish. This dish may or may not have been named for Emperor Ashoka, one of the greatest rulers of India, but it’s definitely befitting a king!

Cook and see for yourself!

P.S. This dish to me tastes a lot like badam halwa and so I’ve added some almond puree to nudge it further in that direction. But you could totally omit it and it’d still taste just as amazing!

This recipe makes 2 cups of Halwa