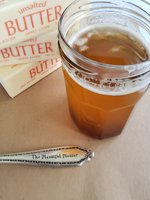 Ghee/Nei/Clarified butter is to Indian cooking what butter is to French cooking. It’s not only good for you (when consumed in moderation) but also has the uncanny ability to elevate any dish from Meh to Yeah! My mother taught me how to make ghee with just two word (in our native tongue, Tamil) counsel. A tip, that my mother-in-law corroborated, when she called me one fine day and found me making ghee. You know the rule of thumb for making ghee, don’t you? she asked and went on to tell me the unwritten rule which to my delight, mirrored what my mother had told me. This morning, my cousin called me and when I told her that I was going to make ghee, she immediately said, ” You know, my mother taught me how to make ghee with just one advise, one that she had learned from her mother”. And I was thrilled, when she told me what it was using the exact two words that my mother had used to educate me.

Turns out that you don’t need a recipe or alchemy to make ghee. You just need the two-word sage wisdom transcending generations, that will turn butter into dripping delicious ghee. And the words are – “Osai Adangatum” which roughly translates to ” Let the sound die down”. That’s it! Making ghee, irrespective of the quantity just requires the comprehension of those two words.

Let me explain how to make ghee.

To make ghee, you need to start with a light heart and a heavy-bottomed vessel.

Place the butter in the pan and turn the heat on. Keep a clean container and strainer ready. In a few minutes the butter will flood the pan with a river of lush creamy liquid. When the liquid simmers, you’ll hear the osai (sound). And what wonderful sound it is. Something like the steady stream of a baby gurgling or the pitter-patter of raindrops. Sometimes it reminds me of the rustling sound of dried leaves being pushed around by a gentle wind. By this time, the kitchen will be filled with a wonderful aroma.

You can simply let the butter do it’s thing or you could stir the pot a couple of times if you’d like. If it’s a heavy-bottomed pan, you won’t have to worry about stirring.

In a few minutes, this sound will stop. At this point, ghee is technically ready and you could proceed to strain it. But if you let it simmer for another 20 secs as I do, you’ll have ghee that is nutty as opposed to the creamy one you’ll end up with if you strain at this point. Both are ghee and it’s just a matter of personal preference.

When the sound stops, using the ladle, keep stirring and pouring the ghee back into the pot. At this point, the dregs are a light shade of brown. You want to take it to a stage where the dregs are either dark brown or deep red. And this will happen in no time. So you’ve to be very alert.

When you see that the dregs have turned a deep dark shade, turn off the gas. Immediately strain into a bottle or container. Take a deep whiff and savor the rich aroma.